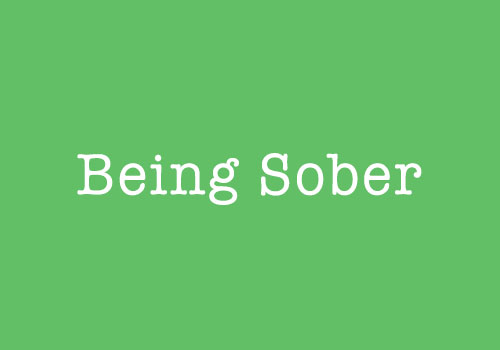 Hi at the end of a previous video  I said that I’d ended up in a psychiatric hospital.  I had been given 6 months to live if I continued to take alcohol or drugs.  But that really wasn’t the reason why I wanted to get sober.

The problem was I didn’t know how to do it. I had no idea how to stop drinking and stay stopped.  I had stopped many a time.  Mark Twain says, he was talking about smoking, he says stopping smoke is easy, I’ve done it hundreds of times.  But the problem is not getting sober, the problem is staying stopped, and there is an even bigger problem staying stopped happily. I’ll talk about these things in this series of videos but first of all stopping and staying stopped.

I went back to Alcoholics Anonymous and as soon as I came out of the hospital.  A couple of the people who were in hospital being dried out at the same time, they had no intention of getting sober.  They were just there to get dried out and get healthy again, get out there again and get on with the partying.  That wasn’t for me, it just was not for me, so I went to Alcoholics Anonymous.

But I had to work at it, because it didn’t come easy.  In the first year I reckon was you know it’s pretty difficult.  I avoided pubs I avoided clubs, I avoided anywhere there was alcohol because I was scared, I didn’t trust myself.  I avoided it like the plague.  The first time I was invited to party I was scared, I was terrified.  I need to go to this party, and there’s gonna be booze involved.  Scary!!  What will I do?

Well I just listened to a few good pieces of advice, put them into practice and I got by. That was fine, I did it!  That built a bit of confidence.  And then I was coming to the end and of  my first year of sobriety.  I thought, I’m never gonna make this.  And the dreams I was having of drinking, nightmares almost, that I was drinking.And then I got there.  I thought wow!!

In Scotland they have they have a tradition of celebrating your first birthday in Alcoholics Anonymous.  What you do is you do what’s called the top table.  The top table is when you share your strength, hope and experience to everybody you know and they all congratulate you on your birthday.  And there was some people from a group I had been in previously and they asked me to come and do my birthday share with them.  And I thought, hey great you know I’m such a good influence.  And I said, is this because I’ve been such a good influence and you want me to share this wonderful story.  And these two guys have been sober for quite a long time and they said, no what we want to show is that if you can get anybody can get it!

A wee bit deflating, but it was true and it’s still true, if I can do that anybody can do and I’ll share much more about how Alcoholics Anonymous in some of the later videos.

In the mean time, look at some of the other videos or posts  eg An alcoholic says sorry)

4 Replies to “Getting Sober”