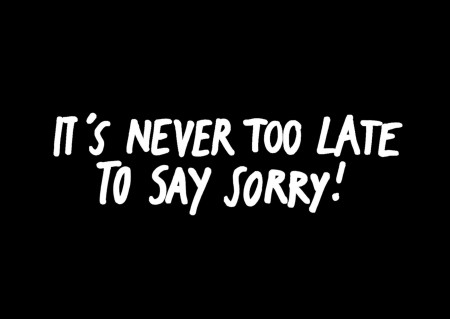 About a year ago I wrote an article apologising for the hurt and pain that I caused by my drinking behaviour. For some time time now I have been meaning to record the video version of that apology. This is that video.

Hi, John here.  I recently made a commitment to the members of bottled up that I would  do a video series talking about recovery, my own recovery, and probably talking and in more general terms about what recovery is, what it means, what it entails and how you do it.  This is the first video of that series.

Now this one’s actually a bit different from most of them, because what I want to do in this one is something which I’ve done before on paper, but I’ve never actually done on camera.  I want to apologize. I want to say sorry for many of the things that I did when I was drinking.

But when I took alcohol, it was different. I’m not saying that I was a violent drunk, but I scared my wife.  And yes, I’m not proud of it, but I pinned her up against the wall and I terrified her.  I was very vocally aggressive, vocally violent and I look back now and I’m ashamed. I’m ashamed of that.  I can’t turn  round now and say well that wasn’t me it was the alcohol, but it was me.  I was a person who chose to take that drink that resulted in me behaving in that way.

I used to say I didn’t have affairs.  I did!  In my head I had many, many affairs. Most women had the good sense not to take me up on it, most women had the good sense to avoid me, because it tended to be when I was drunk that I wanted have affairs, I wanted to sleep with other women, other women just didn’t want to sleep with me.  My head was a cesspit and I’m ashamed of it.

These are some of the big things I’m ashamed about.  These are the big betrayals, the violence etc but there are also the small betrayals.  The betrayals that happened on a daily basis, the lies, the trust that is eroded through alcoholism.  And I did, I lied, I lied and I lied and I lied.

I didn’t lie about everything but did lie about alcohol.  I lied about how much I drank, I lied about whether I had drunk, I lied to go for a drink I lied about the money, I just I lied, I lied a lot and I could stand there and look my wife in the face and tell her a barefaced lie.  Most of the time she didn’t believe it but I expected her to, and for the erosion of that trust I’m ashamed.

And then there are the promises, the promises that I made in a regular basis – “I promise won’t drink again” and I drank!   I promise to be home at a certain time and I wasn’t. The promise that this week I’ll take her out and I didn’t.  The promise that……….., you know you name it,

I made many, many promises.  I promise to clean the house, or I promise to fix the things that were wrong with the house and I never did.  I’d find money and I’d go drinking.  So, my promises were worth nothing and that again betrayed the trust and when I got sober, I expected her to trust me and she didn’t and who would blame her, because I lied and I cheated and I did all of them and for that I’m ashamed.

And sometimes it’s these small betrayals that are the most insidious but also the most severe.  The big ones tend to happen from time to time. The small ones happen all the time and they just erode the trust, they erode the relationship.  They just wear it away.

The person I was at that time was as I say a liar, a cheat, a drunk, violent, angry, aggressive, and most of all selfish very, very selfish and if you are out there and watching this and you’re probably watching it wondering what to do with the drunk in your life, then I apologize to you.  I apologize on behalf of drunks everywhere. I apologize for alcoholics because it’s the family that gets hurt more than anyone else and that’s why my wife and myself started bottled up because we want to put something back in, we want to make amends we want to help the people who suffer this on a daily basis.

And we’ve got a good life and that’s why I don’t dwell on the past too much, but I don’t ever want to forget it.  I don’t ever want to forget what it was like and more to the point what I was like, because the person I was at that time, that was part of what got me sober when I looked in the mirror and I couldn’t stand the person that was looking back at me, I hated that person, I hated him with a vengeance.  So, my only option was to change.

I didn’t change just because I was told I was dying.  I changed because I’d already died inside.  That was the real thing that kicked me into sobriety was my abhorrence of this person in the mirror, this person I had become and the hurt that I caused all around me.

7 Replies to “An Alcoholic Says Sorry”